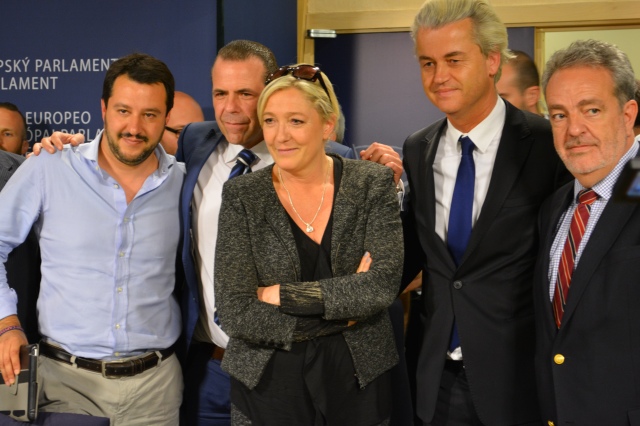 Seven months have passed since our submission to the 2017’s edition of the Professor Paulo de Pitta e Cunha Award regarding the European Union’s existential crisis. In our paper, we stressed that the year of 2016 was marked by a rise of populism and isolationism around the world, and addressed that the European Union must reform itself in order to regain the citizens’ trust and reinforce democracy, even if doing so entails a revision of European Constitutional law.

In one of the paper’s final remarks, we wrote:

“On May 2017, the French go to the polls in the Presidential elections. The eurosceptic candidate Marine Le Pen is an almost certain lock for disputing the second round of the elections. Even if it is unlikely that she will ultimately achieve victory, the same was said of Donald Trump. In the Netherlands, Geert Wilders’ PVV might become the largest political party in the Tweede Kamer (lower chamber of the Dutch parliament). While it is almost certain that PVV will not be able to form a government because they will not achieve the required majority and do not have the support of other parties, such a result should be cautiously noted. In Germany, the dispute will be between Merkel’s CDU and Schulz SPD, none of them being an immediate risk to European integrity. Even so, AfD’s evolution in recent years is worrisome . (…) The political forces that wish for the disintegration of the EU have a lot of defects, but no one needs to tell them ‘di qualcosa, reagisci!’”

Now it is time to draw up the second chapter with an update on the 2017 European political landscape.

Even before the French Presidential Election, in the Dutch general election, Geert Wilders’ PVV (Party for Freedom) second-place finish behind incumbent Mark Rutte could be seen as half a victory against the populist wave. While it is true that Wilders’ result is not bad for its party, it was severely below expectations. In fact, the Christian Democratic Appeal (+6 seats), Democrats 66 (+7 seats) and GroenLinks (+ 10 seats) gained more seats, in comparison to the previous election, than the PVV (+5 seats).

However, Emmanuel Macron’s victory against Marine Le Pen in the second round of the French Presidential and the National Front mediocre showing in the subsequent legislative elections were the decisive and much needed victories that the EU needed in the war against populism. Nevertheless, one should never forget that focusing on our triumphs and overlooking our defeats (however small) is “unsuccessful strategy 101”.

And since then there have been plentiful defeats at the hands of populism. In the 2017 German federal election both Merkel’s CDU/CSU (Christian Democratic Union/Christian Social Union) and Schulz’ SPD (Social Democratic Party) severely underperformed. Furthermore, mirroring our previous warnings, reports of populist radical-right AfD’s demise were greatly exaggerated, since they are now the third party in the Bundestag, achieving almost 13% of the popular vote and winning 94 seats. The German refugee policy was one of the central issues of this election and the party successfully capitalised on that, mobilizing new voters, and getting votes from people displeased with the CDU/CSU and SPD. In light of these results, the SPD preferred to stay in the opposition instead of reforming the grand coalition, therefore the new German government will probably be a coalition between the CDU/CSU, FDP (Free Democratic Party) and the Greens, usually referred to as the “Jamaica Coalition”.

In Austria, Sebastian Kurz, the 31-year-old leader of the Austria People’s Party (ÖVP) and current Minister for Foreign Affairs and Integration, won the last national legislative election and was officially asked by the President to form a government. During his tenure as Foreign Affairs Minister, Kurz expressed strong concerns about migration and is a fierce opponent of the strategy employed by the European Union to deal with the refugee crisis, mainly its total open borders policy.

Nevertheless, he is widely acknowledged as a pro-EU politician and there are good reasons to believe that the same will apply to his government His vision for the future of the EU is also in line with Emmanuel Macron’s. These expectations might be proved wrong due to his highly likely coalition with the far-right FPÖ (Freedom Party of Austria), whose leader is an “aggressive” Eurosceptic. Ideally, for the EU, the FPÖ’s influence would be limited to internal affairs. However, one cannot rule out the possibility of the FPÖ beliefs gradually spreading and possibly contaminating the Austria-EU relationship. It is extremely important that both sides try to avoid such a scenario.

Kurz brings fresh blood to the political elites akin to Macron. Austria’s forthcoming chancellor will be the world’s youngest head of government and has promised a new political style. His role will probably sit between the French-German axis and the Visegrad Countries, even though Austria has always been closer to the first political bloc.

In the recent Czech parliamentary election, the anti-corruption populist party ANO secured the victory with 29,6% of the popular vote and seized 78 of the 200 seats in Czech parliament. The leader of the party Andrej Babiš is the second wealthiest man in the Czech Republic and is commonly referred to as the “Czech Trump”. The party leader’s anti-corruption message resonated deeply with the electorate, albeit he was himself recently charged with fraud in a case involving a 2 million EU subsidy. ANO is against deeper European integration and against Czech adoption of the Euro but is not anti-EU. In fact, Babiš expressed his intention to take a more active role in the EU and to look for allies outside of the Visegrad Group – whose ability to influence the EU political agenda he seems to doubt –, namely Austria’s Sebastian Kurz.

In second place in the Czech election came the Civic Democratic Party (ODS) with 11,3% of the popular vote, in third the Pirate Party with 10,8%, and in fourth the far-right Freedom and Direct Democracy with 10,6%. Freedom and Direct Democracy represents a different breed of populism when compared to ANO, in fact, its leader Tomio Okamura could be considered a bona fide extremist who wants to leave the EU and urged his supporters to walk pigs near mosques and stop eating kebabs. The results of the election could potentially make him the kingmaker in Czech politics. Fortunately, ANO does not seem inclined to enter a coalition with Freedom and Direct Democracy, preferring a minority government.

Seven months ago, when we wrote the original paper, the outlook for the European Union was gloomier then it is today.  Although it is true that populism is still alive and achieving victories across the Union, currently there is no impending sense of doom hovering over the EU. Le Pen winning the French Presidential Election would have been a killing blow, and it seemed possible not long ago. But the EU’s objective should be more than to avoid the killing blow. Thus, the election results mentioned should not be ignored. Proper measures should be taken to both curb the populist expansion and to avoid contamination. There some hopeful signs like the economic growth and the citizens recuperating some trust in the EU as expressed in the latest Eurobarometer. However, the same fundamental issues still exist and consequently the same reforms proposed seven months ago are still needed. President Jean-Claude Juncker’s plainly federalist pitch for a “sixth scenario” in his state of the Union Speech is a good start. Merging the presidents of the European Commission and European Council is particularly welcome. While not as far-reaching as what we proposed and hoped for, at least is a step in the right direction. Hopefully, the first of many.