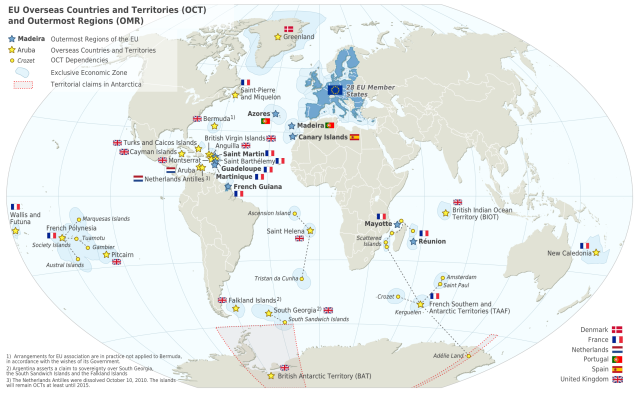 The European integration, from its early stages, has always been seen as a federative construction with its supranational elements being seen as a result of the reshaping of the traditional notion of the nation State. In fact the idea of a European Federation was one of the inspirational ideas of the Schuman Declaration of 9th May of 1950, although it has always been a sensitive issue since then. In any case, throughout the last centuries, there has been an increase of federative forms of political structuring, the largest and most populated States in the planet have some form of federative arrangement. Nowadays, nearly 80% of the world’s population is living in countries with some forms of federal commitment[i].

Some view the European integration as a supranational entity shaped by the agglomeration of its continental nation States, a peculiar form of a federative State, similar to the idea of a United (Nation-)States of Europe. However, despite this view of a macro-political entity has always been insufficient and too limited to address all the Post-Modern socio-political transformations. The European construction did not have only supranational repercussions, but also infra-national effects with the recent uprising of regionalism, decentralization and autonomic pretentions and forms of political structuration.

Most of the regionalist pressure, in the last years, came from Central European States’ regions, although there has been an increasing presence of other regions[iii]. A peculiar case, however, is from European trans-continental and trans-oceanic Insular Regions. Most of these island regions are a repercussion of the historical Age of Discovery, Maritime Expansion and Imperialism. Their far-reaching atypical presence on the Member States’ territories is a challenge to the European Integration, especially considering the social and economical differences compared to their respective continental mainlands.

Outermost regions, on the other hand, are an integral part of the European Union’s territory and, in accordance with Article 349 of the Treaty of the Functioning of the European Union defining special adaptations for the drawbacks and handicaps that come from their remoteness, isolation and geographical limitations. This status, originally, was meant for French Overseas Departments, but the inclusion of Portugal and Spain, and their respective archipelagos, in 1986, ended up giving a new configuration to it[iv].

Most of these regions are archipelagos, and, in accordance with Article 349 (1) of the Treaty of the Functioning of the European Union suffer from drawbacks which are remoteness, insularity, small size, difficult topography and climate, economic dependence on few products. They also tend to have sociodemographic issues like the lack of education and formation by the part of the populations as well as difficulties with trade and transportation.

Outermost regions, in this sense, are a challenge to the European integration. In any case, the European federative model is not the only federative model that encompasses island regions and archipelagos, the United States of America federative model also amasses insular regions. Albeit the insular territories have their particular traits like the fact some of the inhabitants do not benefit from full citizenship and are considered nationals, having some rights more limited. In some territories, only some personal rights under the Constitution are applied. The United States Constitution is not completely applied on some territories, according to Supreme Court precedents known as “the Insular cases” like De Lima v. Bidwell, Downes v. Bidwell, and Armstrong v. United States. Which is unlike the European citizenship that benefits nationals from associated territories. The insular areas, however, are also affected by their economical dependence on key industries, scarce natural resources and unskilled labour, which makes them relay on federal grants to fund basic services, as well as federal support programes. In a similar way as the European outermost regions benefit from special measures regarding funds.

A major trait, in any case, regarding island regions is their developed autonomic sense. Their relation with supranational political entities is also beneficial considering the fact that islands that are small, autonomous and yet non-sovereign actually have substantial economic advantages like free trade with, and export preference from, the parent country, social welfare assistance, ready access to external capital through special tax concessions, availability of external labour markets through migration, aid-financed infrastructure and communications, higher quality health and educational systems, natural disaster relief. Autonomy without sovereignty also does not hinder the development of flourishing tourism economies or offshore finance regimes and may actually facilitate them because of easier terms of access and security. The autonomous status is, therefore, the best of both worlds, providing many of the benefits associated with political sovereignty while delegating responsibilities to, enjoying the security and reaping the material benefits of remaining in association with a larger, and typically richer, political entity[v].

Outermost regions, in this sense, are a major presence on a decentralized multi-level form of political-administrative structuration. Their autonomic self-standing can develop an affinity with supranational entities and form a mutual cooperation that benefits both. That is the case, in the European Union, with the development of the Internal Market. This type of relation can ease some tension between the uneasy relations between regional and national entities, which was the case of some precedents like the Nouvelles Frontières case of the European Court of Justice, in 1986, involving the airline market and French price-fixing laws and their compatibility with the European Union Treaties and competition rules, as well as the Octroi de Mer case in 1994, involving Charges with an equivalent effect to a custom duty on the French territory of Réunion. Insular autonomic regimes and their insertion in a federative multi-level form of governance can benefit it’s dimensional as well as contribute to the federative purposes of a bonding and binding between political-territorial entities that are all under a duty of sincere cooperation and its correspondent principle of Loyalty.

Insular territories like the Portuguese archipelagos of the Azores and Madeira are a distinctive case of an early decentralized and structured form of multi-level autonomic regionalist form of governance with infra-constitutional and infra-administrative effects, as well as national and supranational repercussions[vi]. The autonomic regime is defined on their correspondent Political-Administrative Statuses which are in are in accordance with the European Integration. Article 35 of the Azorean Political-Administrative status defines the duty of cooperation with the European construction, the need for representation, inter-parliamentary regional cooperation and to follow its programs. The Political-Administrative status of Madeira is vaguer with its Article 94 (c) defining the Portuguese participation on the European Union as an area of International Law related to the Region. It is also worth taking into account that Article 225 of the Portuguese Constitution matches Article 349 TFEU.

The recent years have also shown a renewed view of the European Union for its island regions, especially Outermost Regions, considering the constant flexibilization of its regime as well as the sparked interest for innovation sectors such as renewable energies and the blue economy. The island regions also show some major maritime potential, especially on the Atlantic Ocean, which increases the European oceanic presence, leading to recent investments.

Island regions and their autonomic presence on the European Union are, therefore, a major asset on the development of a decentralized multi-level federalism and its implementation against the restraints of inflexible attitudes of member-states on the construction of the common market and European integration, as well as challenge to its constitutionality, principles, cohesion and citizenship.