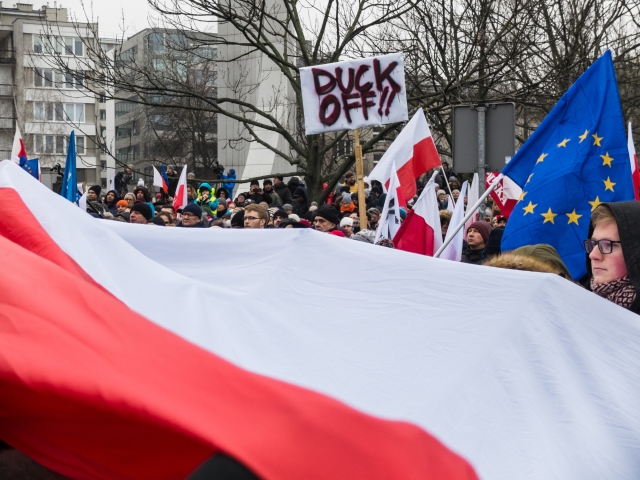 We also highlight the instability that has arisen from the reform of the Constitutional Court in Poland because the interference that the Executive and the Legislative branches have committed put at risk the independence of the judicial power. According to the new law which has come into force, out of the 72 current members that form part of the Supreme Court 27 could be forced to retire, since the retirement age was changed: instead of retiring at 70, the new law would remove men at 65 and women at 60.

After noting that the necessary adjustments were not made by Poland, the European Commission adopted in December 2017 a resolution initiating the procedure established by Article 7 of the Treaty on European Union, where the political debate is deepened between the State concerned and the Council, and which may end with the suspension of certain rights, such as the possibility of Poland being left without the right to vote in the Council. However, this procedure can only be activated in the event that the EC ascertains what the article especially protects, the existence of a clear risk of serious violation of those fundamental values ​​of the European Union. In this case, it is noteworthy that Poland has specifically violated Article 47 of the European Charter of Fundamental Rights, given the lack of impartiality of judges in the Polish judicial system.

This fact took the Commission to start another infringement procedure, seeing that the government of Poland did not back down in its positions, held the independence of the Supreme Court captive as its decisions could lose the effectiveness they had maintained to date. In such a way that it was sought to prevent the Executive from excessively interfering on the decisions adopted by the Supreme Court following the new laws that jeopardise the impartiality of its judicial criterion.

For this reason, it was decided to alert Poland that the EU is not simply an international organisation, but it is based on common values ​​enshrined in the Treaties (Article 2 TEU), and such bases shape its own legal essence in respect to the Rule of Law. In this sense, the Commission is not immune to the violations carried out by the States if they directly decide to erode those values.

In addition, the Commission acts in coordination with the European Parliament, the Member States and the Council, therefore, it is not the only institution that safeguards the observance of fundamental values ​​and principles. The predisposition of the European Commission is assured by the outstanding role entrusted to it by the States, as Guardian of the Treaties and traditionally demonstrates good will in order to build bridges of dialogue between the parties.

On September 24, the European Commission has presented the lawsuit on which it had been working for the last months, requesting the Court of Justice to pronounce itself via the urgent procedure about the reforms carried out by the Polish government. In a manifest manner, there has been a violation of the principle of independence of Justice in the country. The main points of the report have focused on requesting the Court of Justice to set a series of precautionary measures to restore the situation in Poland prior to the reforms and to urgently challenge such legislation.

In a case recently presented to the CJEU, referring to the conclusions of the Advocate General in Case C-216/18 PPU, the execution of a European arrest warrant is shown to be postponed due to deficiencies around the recent reform of the Polish judicial system. There is no doubt that in this process the defendant, LM, has taken advantage of the circumstances to request a postponement of the execution order due to the reforms implemented in the judicial system of Poland as he understood that he was under a real risk of not being subject to a fair and impartial trial.

To provide a more concrete vision, we mention that this European arrest warrant can only be postponed after an examination that is presented in two stages: first, the judicial enforcement authority, after a rigorous examination, will verify if there is a real risk in which it can imply inhuman or degrading treatment in relation to the systematic deficiencies of the Polish state. In addition, it will be necessary to assess whether there are serious and well-founded reasons to justify that the defendant is exposed to the said risk.

The Advocate General stated that the executing judicial authority can only defer this European arrest warrant if it is observed that, in addition to the existence of a real risk of flagrant denial of impartial Justice, it can also be verified that the person is exposed to a risk especially of violation of their fundamental rights. In the same line, the AG concludes by underlining that once the verification is completed, if there is a real risk of flagrant denial of justice of the State in question, the issuing judicial authority will have to request all the essential information detailing the subsequent legislative advances and that have a link with the existence of the risk enunciated and also with those particularities of the person who presents in this case.

We warn then that the reform of the Polish judicial system has had consequences, and this has forced the EC to be involved, examine whether the state is in violation of Article 2 TEU where the fundamental rights of the whole country prevail. This case, therefore, invites us to reflect on the reforms, since currently they do not facilitate the administration of justice within the Union, the states are reluctant to comply with European arrest warrants precisely because they distrust of judicial impartiality – and not only that.

In sum, the reforms made by the government do not show only that there has been an erosion in the coverage of fundamental rights, but also a hampering of the proceedings in the judicial system between the other members states and Poland as the situation profoundly affects the Area of Freedom, Security and Justice.

[i] The Polish Krajowa Rada Sądownictwa is a public body responsible for nominating judges and reviewing ethical complaints against sitting jurists.